In the first of a series of Good Times Guides to the places people live and travel, a look at some of the highlights from a recent trip to the City of Angels.

Felix Trattoria
Felix has recently been nominated for the AIA Los Angeles Restaurant Design Awards and it’s not hard to see why given it has its own pasta lab in the middle of the restaurant. However its the delicious Italian food lovingly made with the best produce and the relaxed, friendly, attentive service that you only get from a neighbourhood restaurant that are the real stars here. Make sure you order the Fiori di Zucca and, if it’s on the menu, the Panzanella salad to start, before tucking into some of the best pasta you’ve ever had. 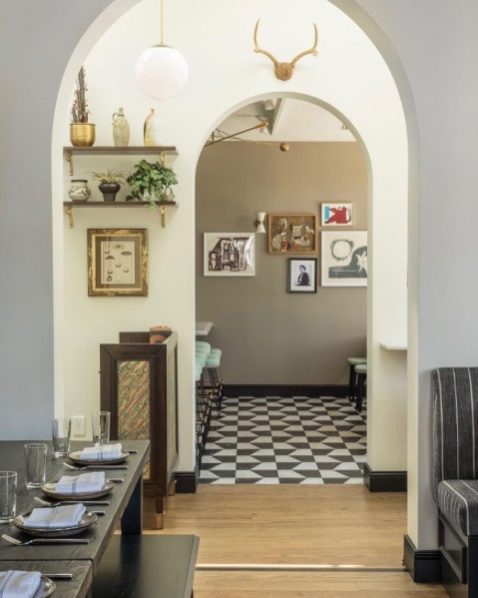 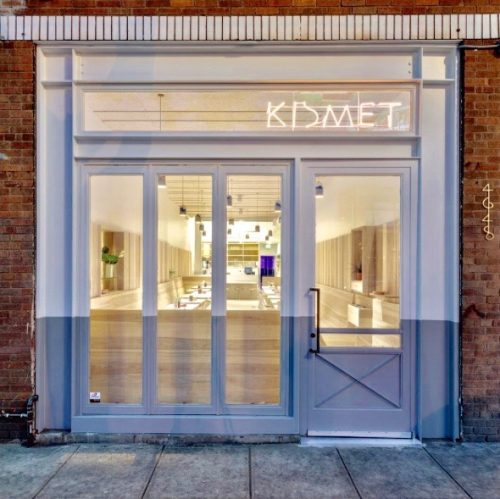 Kismet
The Kismet menu “reimagines Mideast flavors for current-day California” and according to Bon appetit Magazine is one of the 50 best restaurants this year. We had a lot of fun eating here and totally agree with that accolade, again another example of a restaurant that prefers a laid back, friendly vibe and then there’s the food (wow), with more focus on the very best of Californian produce and ingredients, think “Freekah Fritters and Pickley Green Sauce”, “Eggplant with Plum Hazelnut and Tarragon” and “Potatoes with Labneh, Macadamia Nut, Cured Scallop and Urfa Pepper”. 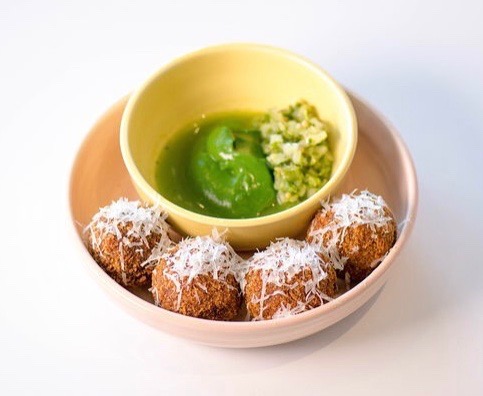 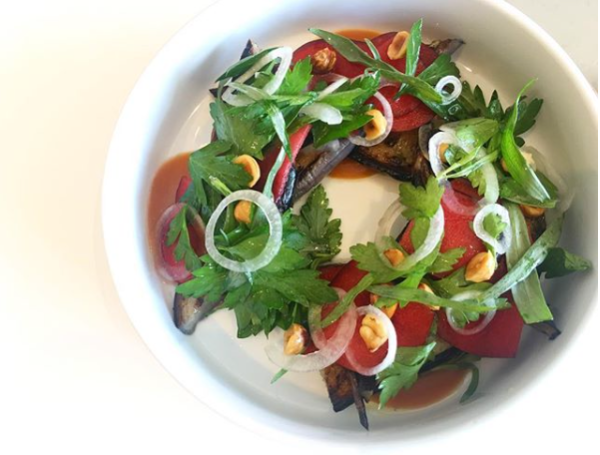 Momed
The Beverley Hills branch of Momed was bustling the day we visited. At the table to our right a young Director pitched his idea for a martial arts film to a Movie Producer as they worked their way through a Shared Momed Plate of hummus, tzatziki, olives, muhammara, eggplant ikra, pickles and a shepherd salad. At the table to our left two young lovers, planned their wedding day as they feasted on a Shakshuka Lunch Plate of Organic Eggs, Peppers and Kale topped with tzatziki and a Spicy Tomato Ragu. For us it was the Organic Three-Grain Salad mixed with avocado, radishes, baby zucchini and a side of perfectly Grilled Salmon. It was an epic lunch however I’m told Brunch on the weekend is where it’s at especially when served with a famous Momed Mimosa. 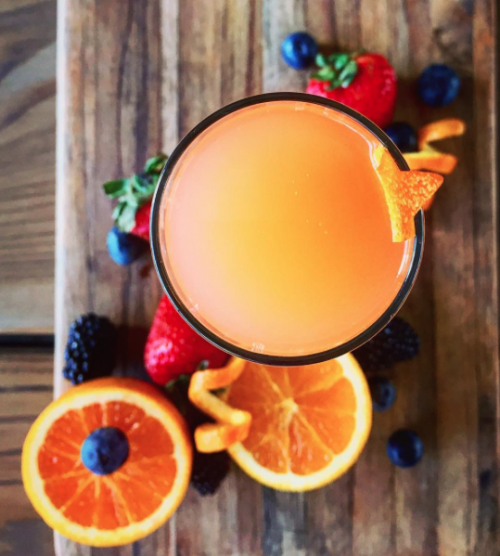 Bar Covell
Bar Covell, nestled underneath Hotel Covell in Los Feliz has one hundred and fifty wines by the glass, no wine list and eight rotating beers on tap but don’t let that intimidate you Just head to the “Order Here” sign and let one of the experts behind the bar find the right wine or beer for you. Bar Covell is all about providing a casual atmosphere, great tunes (90’s hip hop the night we were there), delicious snacks and most of all conversation. We ventured in for a glass of wine before our dinner booking at Kismet (above) and loved it so much we came back afterwards. 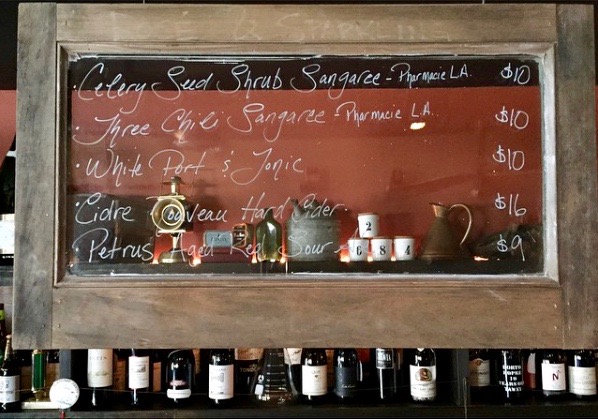 Mixed Company
A review in Eater Los Angeles this year described Mixed Company as “Colourful Vibes and Casual All-Day Fare” which is exactly how I would describe it. After an afternoon of shopping and mural spotting in Silverlake we welcomed the light and airy space, vibrant art, friendly staff who loved to chat and the promise of a cold beer. Mixed Company is a great neighbourhood restaurant which makes its own pastries in-house, wood oven pizzas and a menu of California cuisine driven by, you guessed it… quality produce. 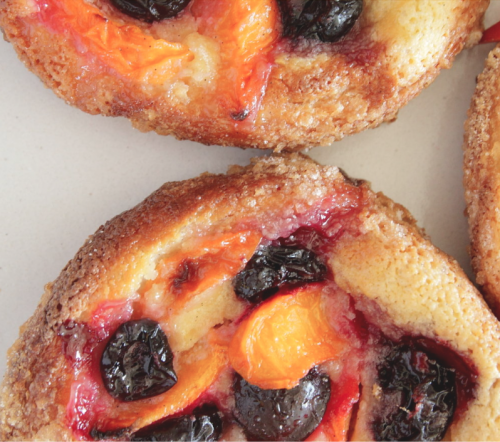 The Getty Center
The ride up to the Getty Center in the Santa Monica Mountains on its futuristic white monorail made us feel like were going to work at Gattaca. Designed by Architect Richard Meier and part of the J. Paul Getty Trust, the Getty Center is a non-profit dedicated to the visual arts, from ancient times to now. Absolutely everything on view, from the architecture, the gardens, the art and those spectacular views of the Los Angeles skyline, the San Bernardino Mountains and San Gabriel Mountains to the east, and the Pacific Ocean to the west are free. It’s the most wonderful example of philanthropy dedicated solely to the understanding and preservation of the arts and is more than happy to share it with everyone. 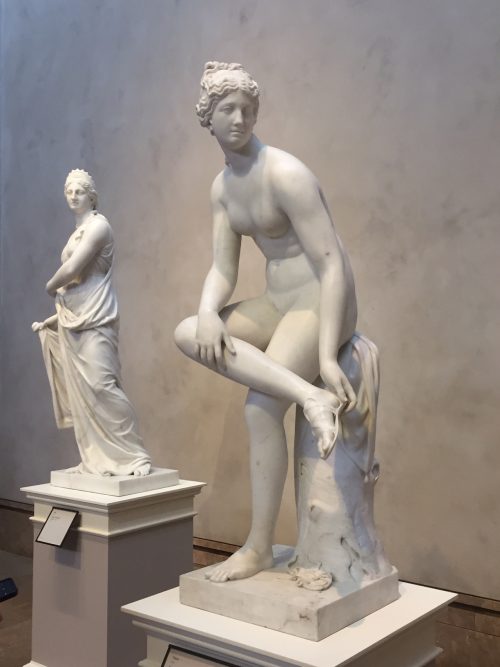 Griffith Observatory
The Griffith Observatory sits on the southern slope of Mount Hollywood in Griffith Park, just above the neighbourhood of Los Feliz. Our Uber driver nearly got lost on the way up however thankfully we got there in the end. Apart from the Observatory building itself, it’s Zeiss 12-inch refracting telescope and Samuel Oschin Planetarium, it’s the best vantage point in LA to view the Hollywood sign and the fascinating parade of people being dropped off by their Uber drivers, from holidaying families or young lovers hoping to get that perfect photo opportunity at sunset, to I don’t who she was but she was wearing 6-inch clear lucite heels. 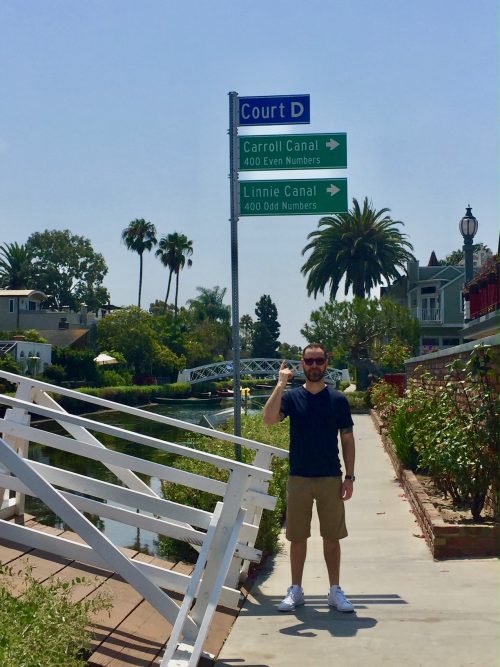 Venice Canal Walk
Our first stop in Venice before a day of shopping on Abbot Kinney Boulevard (below) was a walk along the Venice Canals which begins near the Washington Boulevard and Pacific Avenue intersection, at the corner of Washington and Strongs Drive. Just look for the small sign that says “Venice Canals Walkway”.

Bike ride from Santa Monica Pier to Venice Beach
We steered clear from the Venice Boardwalk, preferring to watch it from afar from our bikes, stopping intermittently to watch a beach volley ball match and hot skater dudes before nearly being written off by a couple of guys whose gaze was suddenly drawn to a modelling shoot of a girl in a lime green girlkini (no 6-inch clear lucite heels though). 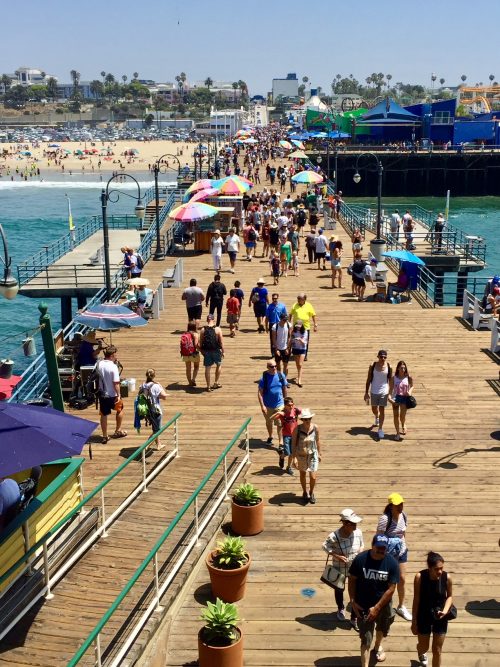 We hired our bikes from Sea Mist Rentals, conveniently located at the end of the Santa Monica pier.

Street Art and Murals of LA
Street art and murals reign in LA, they are everywhere so don’t forget to look up and look around, whatever neighbourhood you find yourself in.

Clare V.
I’ve been a big fan of Clare Vivier for a while so really loved the opportunity to visit her flagship Clare V. store which is right in the heart of Silverlake on Sunset Boulevard. Everything is 100% made in LA with a Parisian twist, with the Parisian influenced by the time she spends in France each year. Thoughtfully placed in between clutches, bags, jewellery, printed tees, sweatshirts and other apparel you will find some of the designer’s favourite books, vintage magazines, ceramics, figurines and plant life. Clare V. also has stores in Santa Monica and West Hollywood. 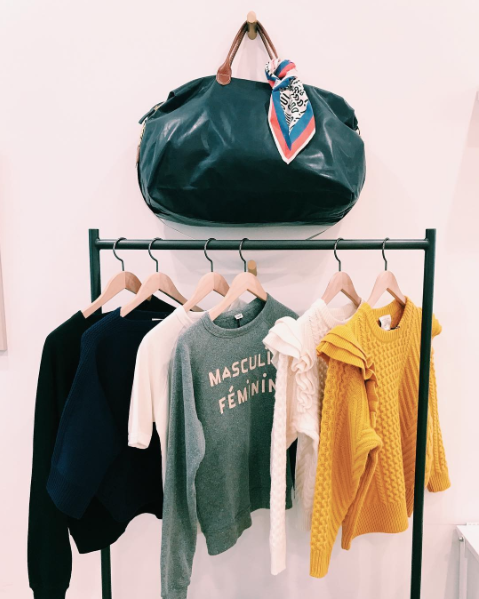 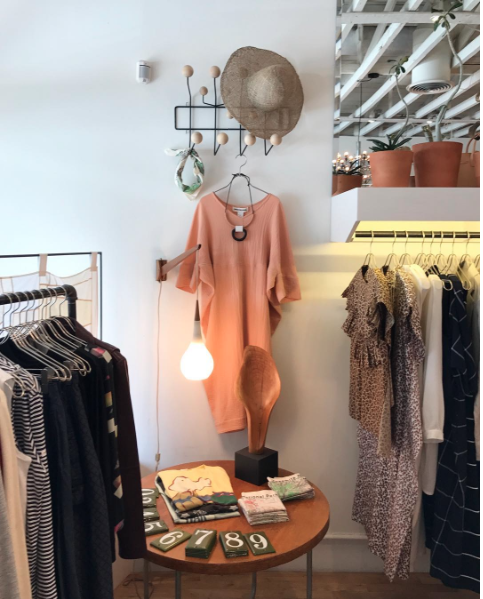 Mohawk General Store
So you are going to a social gathering that requires something new to wear, plus a gift for the host (and one you wouldn’t mind receiving yourself) then Mohawk General Store is the ideal place. Another store to get lost in as you get up close and personal with Dries Van Noten, Lemaire, Isabel Marant, Common Projects, Ancient Greek Sandals and Mansur Gavriel as well as jewellery, perfume, candles, stationery and objects for the home. Again we visited Mohawk General Store and Mohawk Man in Silverlake however they also have stores in Pasadena and Santa Monica. 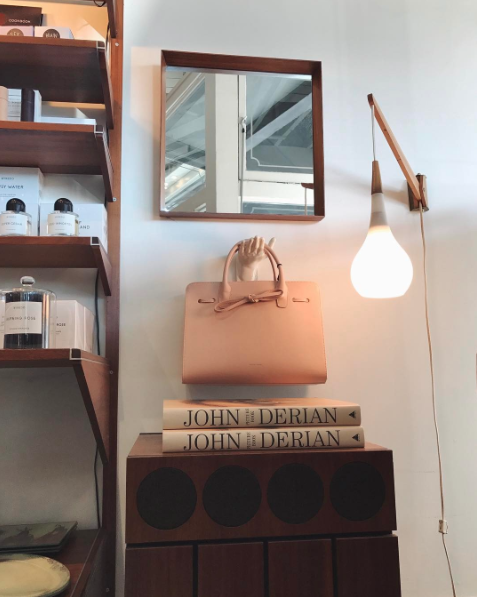 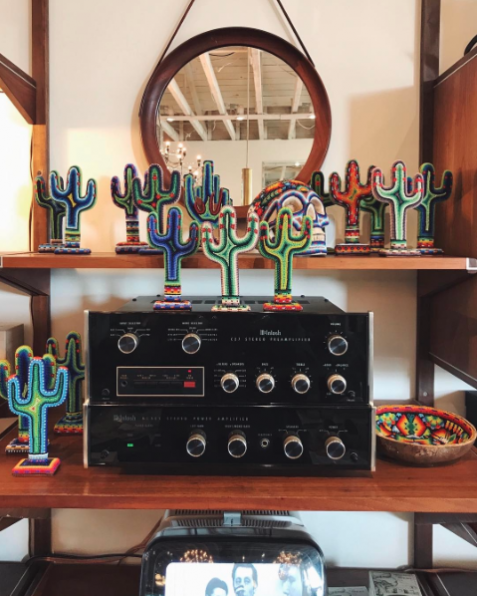 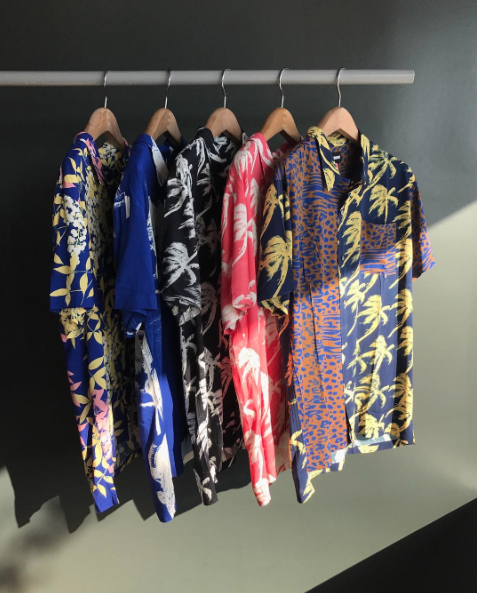 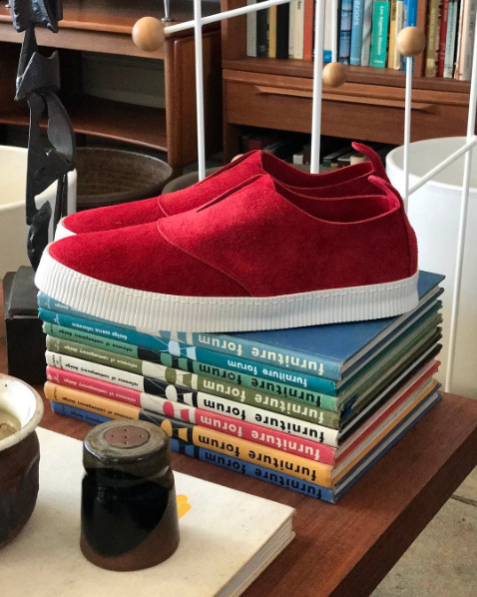 Mona Moore
Mona Moore’s Instagram bio describes itself as “Mona Lisa meets Mary Tyler Moore”. When we walked in I thought for a moment we had entered a store designated for stylists and fashion buyers only until we received a friendly welcome from everyone inside and an apology for the photo shoot going on, which made it all the more fun to shop. Think luxury fashion with an edge: Alexa Chung, Comme des Garcons, Maison Margiela, Rodarte, Vetements and The Row.

Paul Smith
The flamingo pink wall of the Paul Smith Store on Melrose Avenue in West Hollywood is the most instagrammed spot in LA, however as with most Paul Smith stores around the world it’s what’s inside that really counts, divided into boutiques that resemble a movie set filled with clothing, accessories, fabrics, curious objects, books and furniture. My husband used to work for Paul Smith in London years ago and was pleasantly surprised when the Manager of the West Hollywood store recognised him and shared tales of all the good times they had working together there. 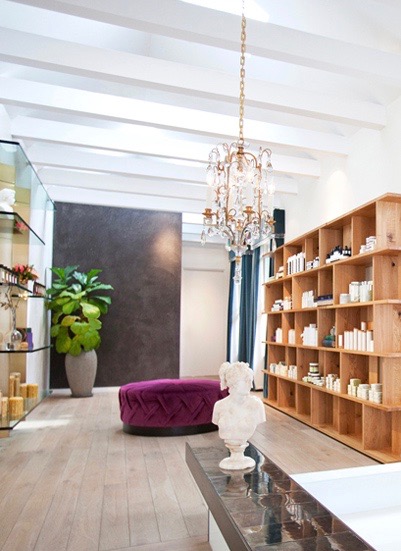 Strange Invisible Perfumes
Before we left for our trip to LA a friend of mine made me promise to visit Strange Invisible and say “hello” for her. She also mentioned it would be very hard for me to leave without buying a fragrance myself. Harper’s Bazaar describes the botanical perfumery’s fragrances as “quietly sexy potions”, they’re influenced by body chemistry so they don’t wear you, you wear them. You can also treat yourself to other lotions and potions such as Root Science Organic Skincare and Habit Cosmetics. I left the Venice Boutique on Abbot Kinney Boulevard with “Taurus” one of Strange Invisible’s “Perfumes of the Zodiac”, with notes of geranium, maté, oakmoss, vetiver, frankincense, neroli, rose, and grapefruit. 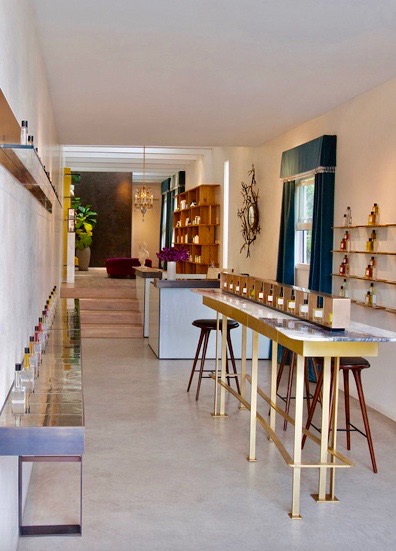 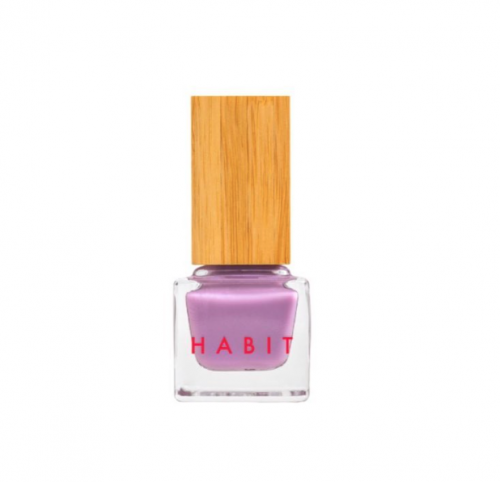